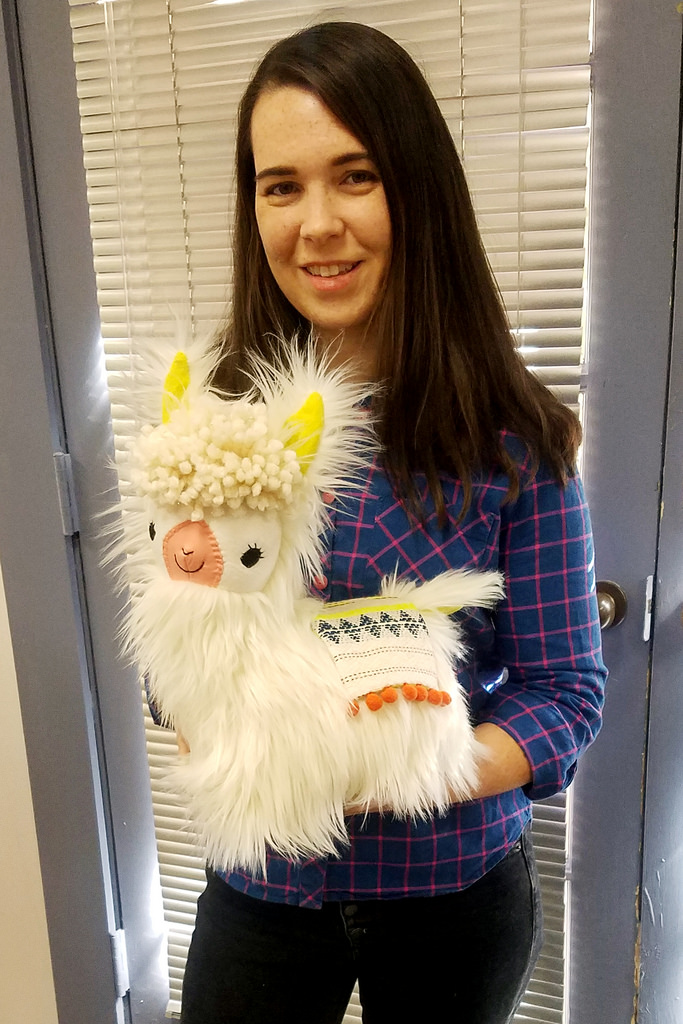 I sometimes sew gifts for the holidays, but not regularly. I’ve sewn dresses for my cousins before and a quilt or two. Usually, time constraints keep me from finishing my ambitious projects.

Luckily my sewing group scheduled a retreat last weekend which was the perfect time to complete this stuffed llama! 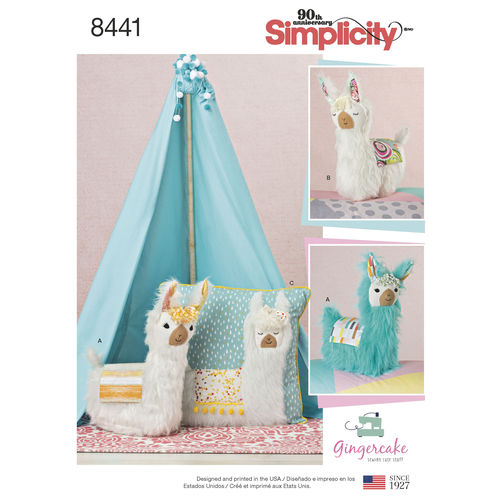 I used Simplicity 8441 although the designer also has her own PDF version. The Simplicity pattern includes the pillowcase as well.

I bought the fur and face-fleece from Joann. They have a big faux fur selection in the winter. The other pieces – the mouth, ears/tail/base, and blanket fabric were all leftovers from other projects.

I made one slight mistake, however. The pattern is well designed in that the neck and body are cut in such a way as to make the llama’s face turn slightly to the side. But attaching the face and neck to the body was a little tricky for me. I wasn’t using a walking foot so my face and neck ended up a little off-kilter. In the end, though, it just looks like my llama’s face is tilted a bit. So if you’re making this llama, be sure to match the head and face up just right when sewing!

Making the yarn wig was difficult. I found it helpful to wrap the yarn around a longer piece of cardstock. With the original three-inch-long piece of cardstock, the yarn kept sliding off the cardstock as I sewed it. You make the little wig separately then hand-sew it to the llama’s head. I used chunky yarn with a metallic thread to match the metallic in the blanket but I think I used too much yarn as the wig is very full.

There’s quite a bit of hand sewing/embroidery on this project. I chose to blanket stitch around the mouth applique piece.

The hole for the stuffing is not large (it’s at the base of the body near the neck) and I used the kind of stuffing that comes in little tiny pieces of fluff. I had to jerry-rig a paper cup into a funnel to fill the llama.

The only significant change I made was to tack down the blanket rather than attaching the string ties that wrap around the llama’s body. I wish I had stuffed the tail to make it stand up better. The ears stand up just fine without any stuffing.

He’s super cute! If you like sewing stuffed animals and can deal with fur I’d recommend this pattern.

So that’s it, I’m now going to end this post with a series of choice llama gifs. Enjoy!