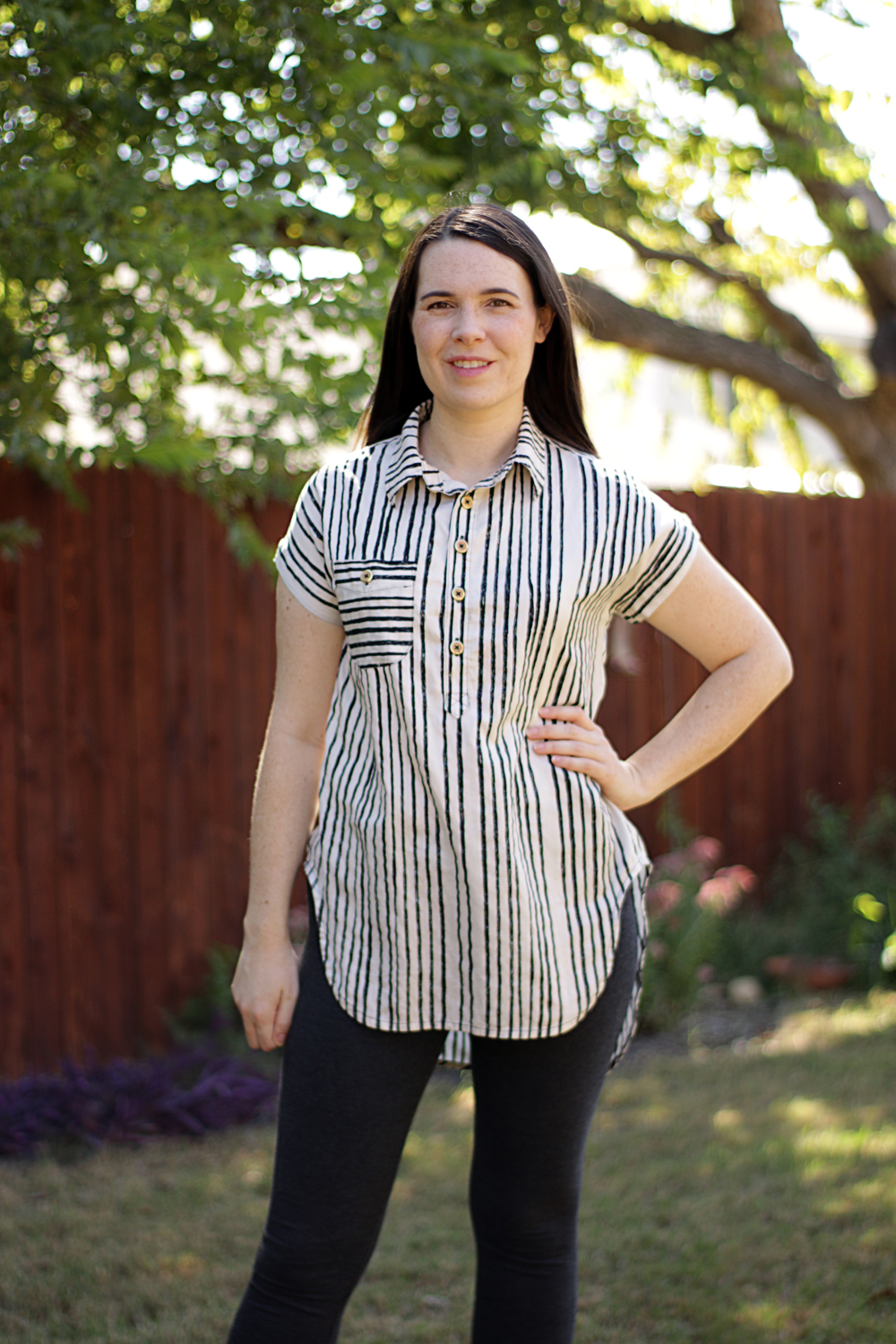 I actually finished this shirt in January but it had a problem (I’ll get into that later) and only just recently fixed the issue.

This is my third Kalle shirt. For my first, I made the hem halfway between the length of the crop style and the tunic style. For my second, I cut the cropped length. For this one, I went with the tunic length.

I want to say this is a Japanese cotton shirting. It’s extremely finely woven and really smooth. It might even be made by the same brand as my first Kalle’s fabric. All I remember is that I bought it from a fabric store right before it closed. The stripes look like they were hand-painted.

The buttons came from an antique mall near my house. They’re not antique buttons but the seller had BOATLOADS of button cards for cheap. I wish they still had a booth there but alas, I couldn’t find them the last time I went.

Now, having made this shirt for the 3rd time I figured I wouldn’t have too many problems, but when I tried it on I noticed some weird fit issues. The whole shirt kept wanting to roll toward the back. This made the sides seams angle forward which made the front hem stick out and the back hips bunch up. The button placket was pulling up at the neck and the collar stuck out at the back. And the shoulder seams were pushed way back.

This was odd because I hadn’t experienced this with my other two versions. I did however notice on my cropped version that the neck hole was too small. I later took the neckband off and widened the neckline to fit. On my first shirt, this hadn’t been a problem because I never buttoned the top two buttons.

I wondered if the tunic length was causing the issue and because my other two versions were shorter, I never noticed a problem.

I’m still not sure what the problem was. Should I have cut a larger size? My other two fit fine so I cut the same size as those.

I could have done a forward shoulder adjustment but that wouldn’t have fixed the neckline and side seam issue.

In the end I did the same fix as my cropped Kalle. I deepened the back neckline and added to the collar. Except I didn’t have enough fabric left to cut a new collar and collar stand so I thought I might split the existing collar in half and insert a 2in wide panel in the center back connected to the original collar.

I’ll spare you what this ended up looking like because it is a hot, hot mess. What I should have done was completely remove the collar. What I did instead was partially remove the collar along the back neckline, then I kind of shimmed in a new panel in the middle of the split collar and sewed it all back up to itself and then reattached it to the neckline. It was a mess and I had to do a lot of hand sewing to make it look even moderately neat.

Luckily it’s in the back and with the collar folded down you don’t notice the lumpy monstrosity hiding underneath.

This fixed the side seam issue. My seams now go straight up and down which fixed some other issues. My neck also isn’t being choked as much but the shoulders still want to slide backward after I move around for a little while.

I still think it’s wearable and I love the fabric and the buttons and the stitching on the placket and pocket is really nice. But recognizing these fit problems now has put a damper on my wanting to make this pattern again. Which is a shame because my first Kalle is one of my most worn and most loved garments.

I will readily accept any and all advice for how to tackle the fit problems with this shirt. One thing I’ve noticed since working on so many historical costumes lately is that I am much more particular about fit these days.