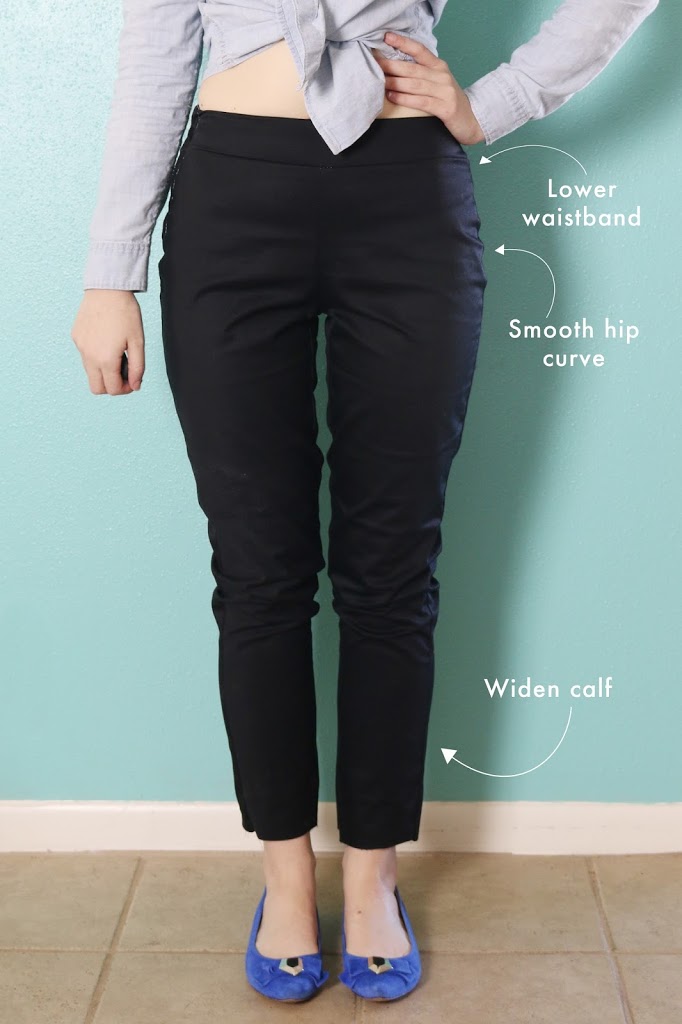 Unlike some people, I have pants/jeans that fit me really well. Those dang Gap jeans must be woven with angel hair or something ’cause they fit like a glove. The only problem I tend to experience with them is that they stretch out even with only 1% spandex (I’ve checked).

But any time I try to make my own skinny jeans/pants I always hit major roadblocks in fit. My friend said it’s because my hands are too big, insinuating that Gap jeans are made by exploited Chinese children (which is probably true, ugh) whose tiny fingers are able to sew the perfect fit.

So why try to venture into the world of skinny pants once more? Well, this winter I realized that I only own two pairs of pants, both jeans, and one pair can only be worn with heels meaning I’ve lived in the same pair of skinnies for the past 3 months straight. I wanted some non-jeans but didn’t want to buy some 50% polyester trousers that I would sweat through in the dead of winter so here I am again, facing down the seven levels of pants sewing hell. Will I make it through Dixie’s Inferno??

The Pattern: Colette’s Clover pants. I’ve made the Juniper Trousers with success but ended up deciding I didn’t like the wide leg look. But I figured those pants and the Clovers must be based on the same block so if the Junipers fit fairly well than the Clovers might work, too. Obviously the Clover pattern is meant for stretch wovens and the Junipers are a much looser fit but the crotch curves are almost identical.

The Fabric: Some stretch sateen from Joann. It’s cotton with 3% spandex. Nothing special.

The Changes (that need to be made): To start I sewed up a size 4 with no changes just to see how it looks. These pictures are the first version.

So let’s go around and see what changes need to be made, shall we?

First of all, I want to lower the waist band. These are a mid rise which isn’t bad but I’d rather have a lower waist. This is good, actually, ’cause that means I’ll eliminate the small darts in the back which I think are contributing to some pull lines. 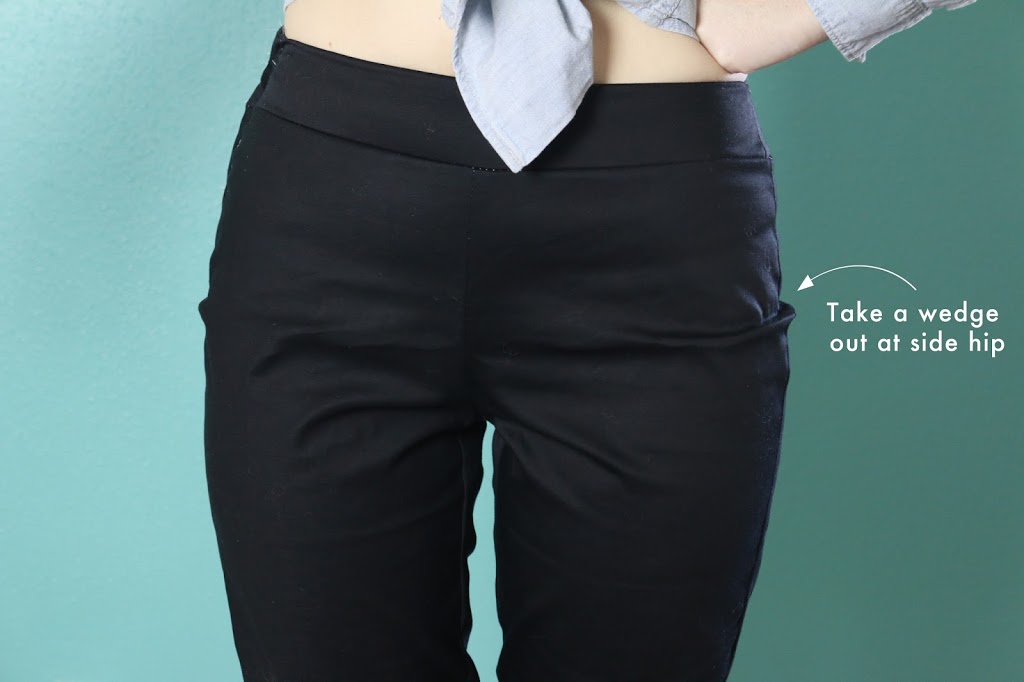 Now for fit. The most obvious thing I notice from the front are those pull lines pointing to the crotch. I think I have a solution to that. From what I know of stretch skinny jeans I have this theory that the front crotch curve has to be very very slight, hardly a curve at all, or else the fabric pulls right across to that point. These pants have a small curve but I still think that’s too much. I’m going to shave off the front curve and transfer the excess to the back pattern piece and see if that helps.

Another major problem, that calves are too tight. So much so that when I walk the fabric slides up around my thigh so I get a whole crop of wrinkles and fabric folds. I’m hoping most of that can be removed by widening the calf area. 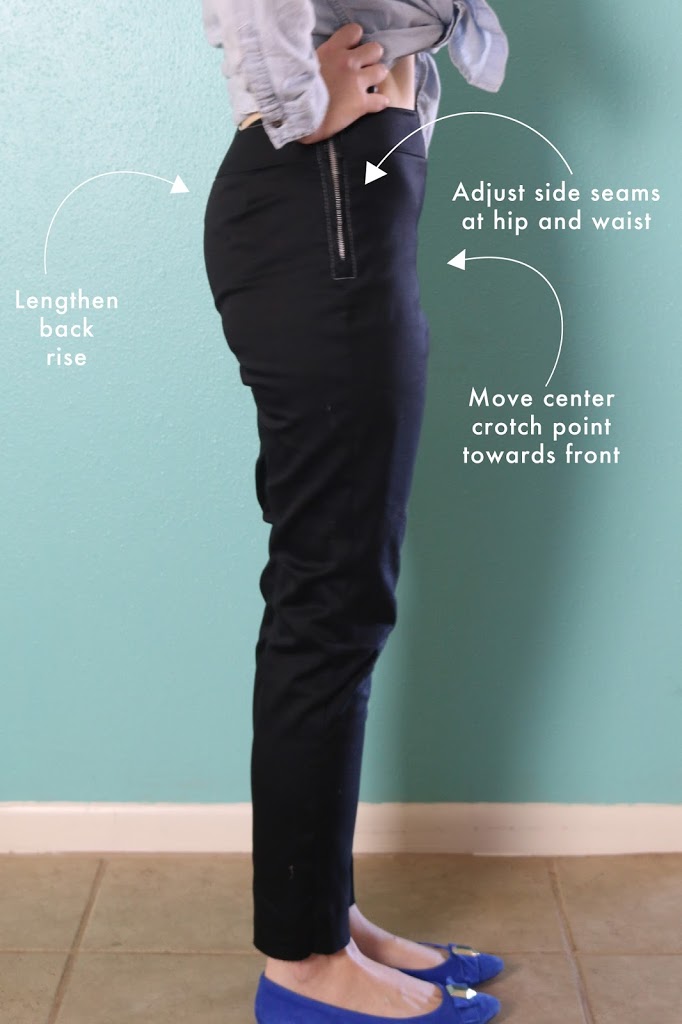 I can already tell that the back crotch curve is too shallow and the rise is too short. From the side you can see that the waist band is lower in the back than the front. I think this rise issue is contributing to some horizontal pulling in back as well as pulling the side seam back at my waist. Once I fix the rise I’ll be able to tell if I need to widen the back pieces at the hips.

At the side hips the fabric keeps wanting to fold over on itself which tells me I need to cut out a wedge from the edge tapering to nothing at the center. I also need to flatten the side curve at the hips a bit. 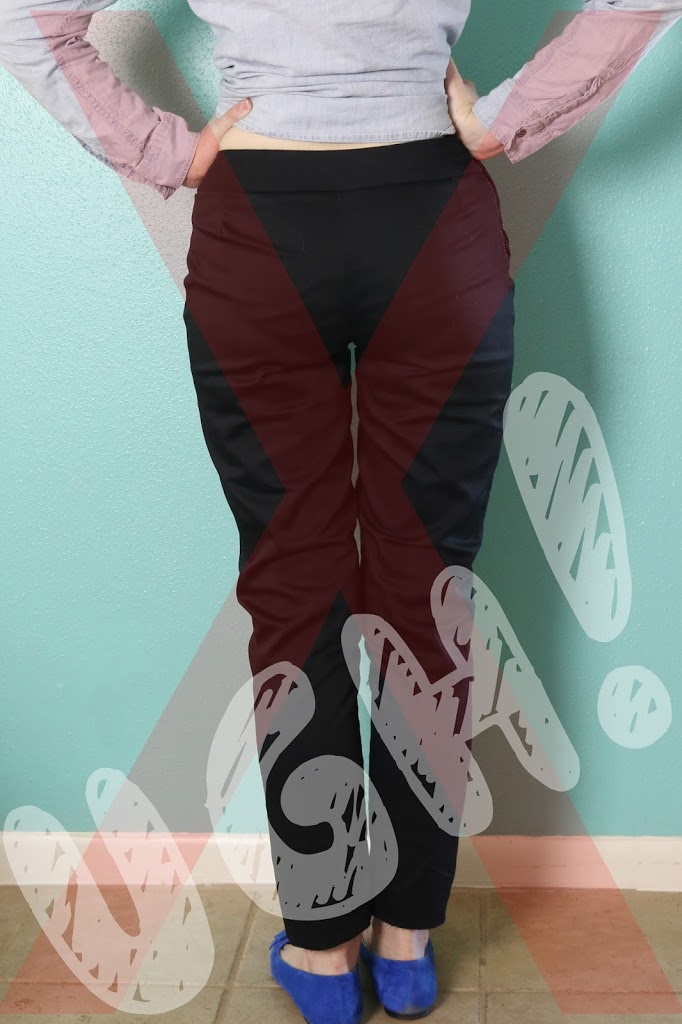 From the back it’s a complete mess. Tons of wrinkles in the thigh (probably from that tight calf problem) and pulling in the hips. I think the widest point on my hips is lower than the pattern’s. I will try working on the above mentions issues first then see how many wrinkles and secondary issues still remain.

The Results: I redrafted the pattern with all those changes and I’ve cut out the pieces. Now they just need to get stitched up into Muslin V 2.0 and start the assessment process all over again.