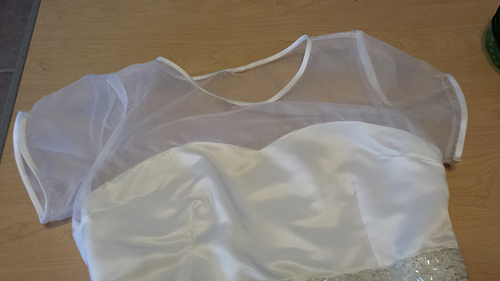 The Wedding Macaron is coming along nicely. Many a Battlestar Galactica episode has been watched while hand sewing…

Since last time I’ve assembled the whole shell of the dress, made and sewed bias tape to bind the edges of the neckline and sleeves and attached the yoke by hand.

But it wasn’t without issues.

I was using a soft organza for the yoke and it was just not working for the life of me. The seams in the shoulders and underarms were ok, not the best, I made mock flat fell seams hoping that they would be stronger than French seams. Once I got to the sleeve seam however all hell decided to break lose. The fabric must have hated me or something. I could get the first line of stitching done but then trying to fold the seam allowances in to stitch them down was a nightmare. Finally I did it by hand then machine stitched over it but the seam looked wrinkly and puckery. Not going to work. Sorry, don’t have any photos of this part.

Plus I had already attached the bias binding to the sleeves and neckline thinking it would be easier to do without the rest of the dress weighing it down as I sewed. 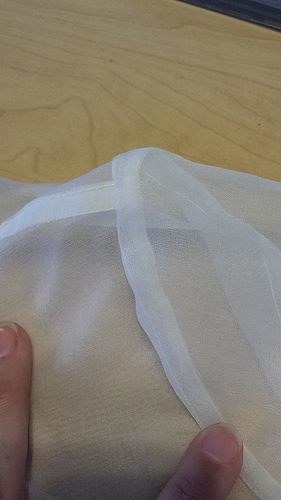 (shoulder seam and French seamed sleeve on the new yoke)

After basting the yoke to the rest of the dress I decided it was a lost cause. Luckily I had plenty of the plain regular old organza that I interlined the dress with so I cut a new yoke and sleeves and whipped up a better version. I mock flat felled the same seams and French seamed the sleeves.

One stupid oops, though, at first I accidentally stitched one of the sleeves upside down! Easily fixed, 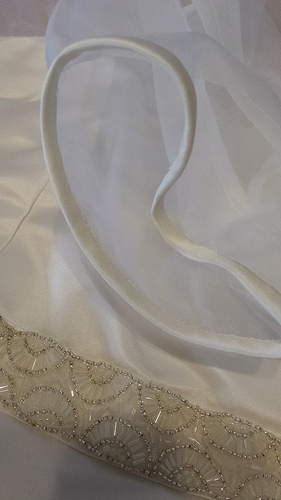 Then I seam ripped off the binding from the old yoke and put it on the new nice, happy, totally easy to work with yoke. So much better! Tip: If you’re going to add bias as a neck binding instead of the facing be sure to have your stitching line 5/8″ from the edge. This isn’t a neck opening where you can just line up your tiny binding edge right up to the neck edge… you need that extra space or you’ll be squeezing your head through! 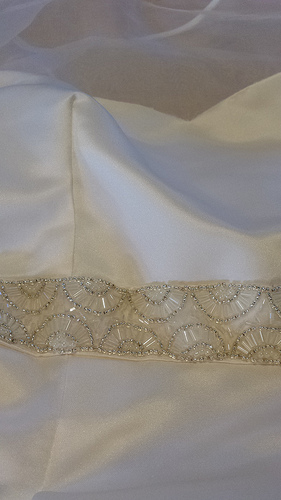 Then I added the waistband trim on by hand, no real issues there.

I stitched the yoke to the dress body by hand no problem but I want to go back and reinforce the seam. I also need to reinforce the should seam with some stay tape. 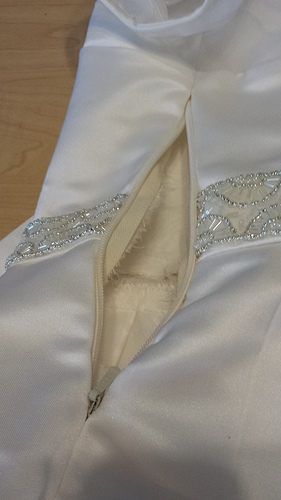 Wow, almost a completed dress! Next I added an invisible zip by hand. I made the opening a little short so I have to go back and stitch the side seam smaller. I also want to reinforce the zip. Those invisible zippers always seem a little precarious, ya know? Don’t want a ripped out zipper!

I want to reinforce the waist band area, too, where it meets the zipper, just to make sure the beading is secure and I can snip off extra beads on the inside of the seam to make the zip slide easier.

So after I do all the little finicky reinforcement bits I’ll be pretty much done – unless I want to add a lining, which if I do I’d only need to attach it to the yoke seam, the zip and I’d probably tack it to the waistband.

I think I’ll wear the dress around the house for awhile and see how it feels with no lining and then make a decision.

I’m only showing you bits and pieces, can’t show the whole dress yet, ya know. 😉