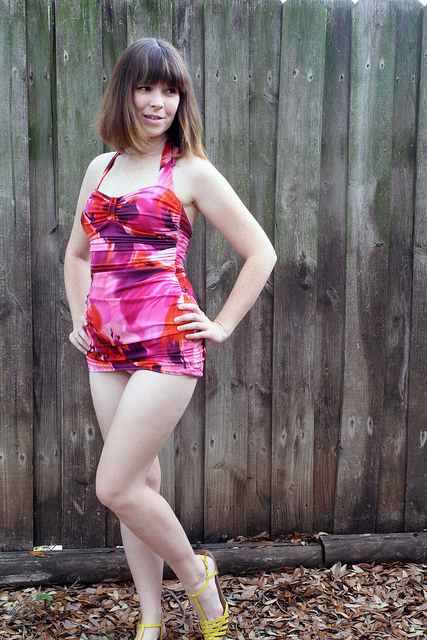 Hey readers, I feel like I’ve been neglecting this blog and my blog reader/twitter/sewing community in general for the last week or so. Sorry for that! I hope to get back to reading all your lovely blogs and comments right away. If you want to read more about what’s been making me so distracted you can skip down to the bottom of this post, or skip over it entirely.

In the mean time I want to talk about my new swimsuit! This is kind of my late submission for the Swim-along even though I finished it over a week ago. Travel and working at the fabric store (and other things) have kept me from taking pics of it so far but I have already gotten to use it at my cousin’s 5th birthday party and I plan on wearing it to my friend’s birthday party next weekend, too. I love this suit! 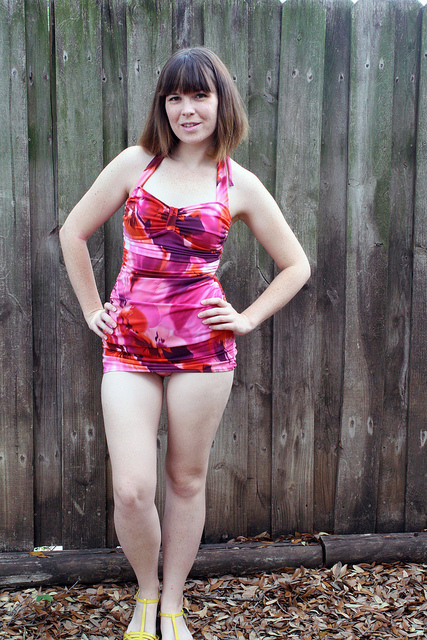 The Goal: I wanted to make a suit for the Swim-along. My other bikini I’m working on still hasn’t been finished yet. Also Heather Lou of Closet Case Files so kindly sent me this pattern to try out so I wanted to whip one up.

The Pattern: If you follow sewing blogs you’ve already seen this Bombshell Swimsuit pattern. Dozens of people have made it, as we all should, it’s awesome! My favorite feature is the “skirt” effect in front that’s great for those of us who worry about coverage in the front as well as the back… The back is great, too. Full coverage in the bum area as well. 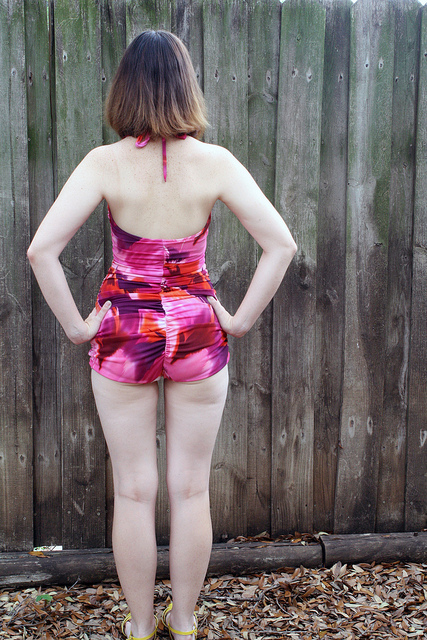 The Fabric: I bought this swim fabric from Fabricker. It’s kind of an abstract floral print. The colors remind me of a Polynesian sunset or something. I’ll have to remember that when I’m swimming in a stagnant creek where I’ll most likely be wearing it here in Central Texas.

The Changes: I didn’t make any changes to the pattern this first time but next time I might tighten the elastic on the front neckline a bit more. It’s not a huge problem as it is right now and so far I’ve picked the lazy route and decided not to go back and re-sew it. 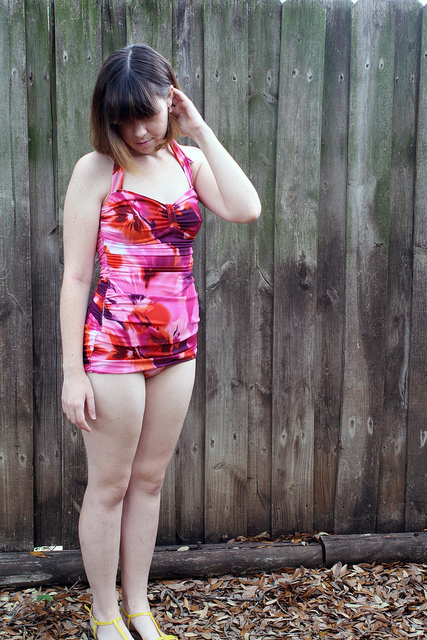 Also next time I’ll baste my lining and outer layers together with a straight stitch rather than zig zag or serging because basting the front and back layers then stitching them both together at the side seams makes for a lot of exposed basting stitching to rip out. Some of which I have yet to remove… one day… 😉

The Results: This is a great pattern design. I didn’t follow all the directions all the time although I recommend that you do. With so many elements and pieces there is a logical order to how to assemble this suit which you should follow. The instructions are so detailed that I think an advanced beginner to use this pattern to sew her first swimsuit and feel incredibly accomplished.

I was worried the straight line at the bottom would exaggerate my pear shape but if it does, I don’t care. I love this suit and I think it looks pretty darn good!

Ok, so back to my excuses about not being around much. I don’t intent to turn this into a political blog but I feel compelled to talk about this subject. You might have heard by now about how here in Texas we’re facing legislation that could effectively close dozens of women’s heath clinics across this state. On Tuesday, June 28, Senator Wendy Davis filibustered for over 10 hrs to block Senate Bill 5.

I was there that Tuesday in the Senate Gallery from about noon to 4 and later that night I stayed up watching the live feed of the filibuster. The bill failed but our Governor called another special session to push the bill through. So I went back to the Capitol again on June 30, and again for the big rally on July 1 and for the House committee hearings on the 2nd and again on the 3rd for good measure. I’ll be back next week, too.

And if I wasn’t wearing orange or packing protest snacks or working at the fabric store I was on Twitter and news sites trying to figure out what was going on and to try and make myself feel better.

You see, for the first time in my life I feel like I am being specifically targeted because of my sex or my gender, not anecdotally in society but by those who make the laws of the land. For me, personally, this bill isn’t about saving babies. This woman already wrote an excellent piece on that point. And let’s face it – I’m a privileged, educated, white woman who has never been without health insurance when she needed it, and who, most likely, will never need an abortion. Heck, I’ve never even stepped foot in a Planned Parenthood. This law will not directly effect me. It will however effect rural women, women of color, and women in poverty and that’s not ok.

But even for white ladies like me this bill is dangerous. While watching some political round table show one of the commentators made the distinctions between the Supreme Court’s recent decisions on DOMA and the Voting Rights Act. He said that the SC struck down DOMA because it explicitly discriminates against gay couples while the portion of the VRA was struck down because it dealt with implicit discrimination that wasn’t obvious. Because of that states like Texas can enact Voter ID laws when registered hispanic voters are known to be less likely to have a photo ID than whites.

Bills like what are now HB2 and SB1 are examples of both explicit and implicit discrimination against women. The explicit part is as obvious as a coat hanger. But whether or not these bills pass and are ultimately struck down by the SC, the implicit part will linger.

Bills like these legitimize and perpetuate the myth that female sexuality is bad or taboo or “a sin.” These bills reenforce the idea that women’s sexuality must fit inside a tiny box of abstinence until heterosexual marriage. It’s the “virgin/whore” dichotomy we’ve been dealing with for thousands of years.

That mentality is used by businesses to deny employees contraception coverage (because it’s “against our beliefs”), by education boards to not fund day care in schools so teen moms can graduate and reduce their chances of being on welfare (because it’s “encouraging bad behavior”), by legislators who think they can debate what is or isn’t “legitimate rape.” It’s the mentality that keeps law makers from understanding the bills they write (rape kits =/= abortion). It’s what makes men in cars think they can honk and catcall at me while I’m trying to mow my own damn lawn. It’s what enables slut shaming and rape culture.

If you are a woman in Texas in need of abortion services you are at best a “victim” and the state needs to protect “vulnerable women” like you and at worst you are a super skank undeserving of state assistance to help raise a child you can’t afford. There’s no winning. It’s only black or white. And the mentality seeks to divide us.

During these protests I definitely felt an urge to “prove” my self worth to pro-lifers. I’m not a “murderer,” I’ve never even been pregnant. I’m a respectable law abiding adult. I’m not one of them. And see, that’s the real problem. The anti-women mentality is implanted in girls like me from an early age. At 11 I had to hear from abstinence only presentations at my school that as a woman I am defined my by “purity” and that once I’ve unwrapped my “pink present” I’m basically useless. That in order to have sex I need to be married (even if it’s an abusive marriage, like my mother’s), not that I need to be ready or give consent or be safe and informed. My mother was first married at 16 and she sure as heck wasn’t ready for sex. Teaching these things to girls is wrong because having sex or not having it does not make her a terrible person. It makes her a person, who shouldn’t have to demand respect and dignity. 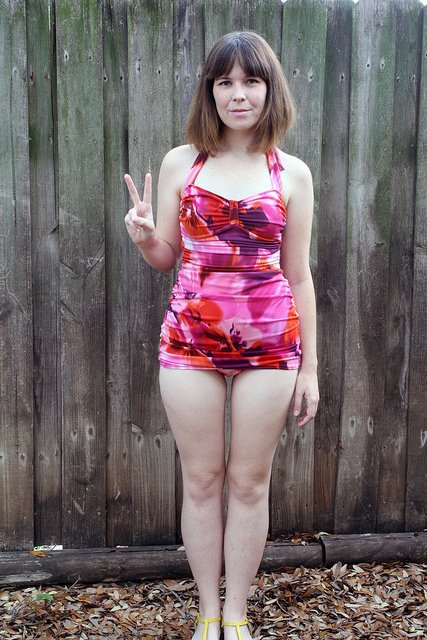 The mentality behind these bills makes it so that people feel they can make assumptions on a woman’s character not based on her personal history but on her specifics body parts.

When you look at that picture of me above that I took in my back yard you can’t tell if I have kids, if I’ve ever been pregnant, if I’m married or single, if I’m gay or straight, how many sexual partners I’ve had, when I first started having sex, whether or not I use birth control, what my religious beliefs are or how I personally feel about abortion.

The only things you can tell from that picture up there (besides the fact that I am uber-pale) is: