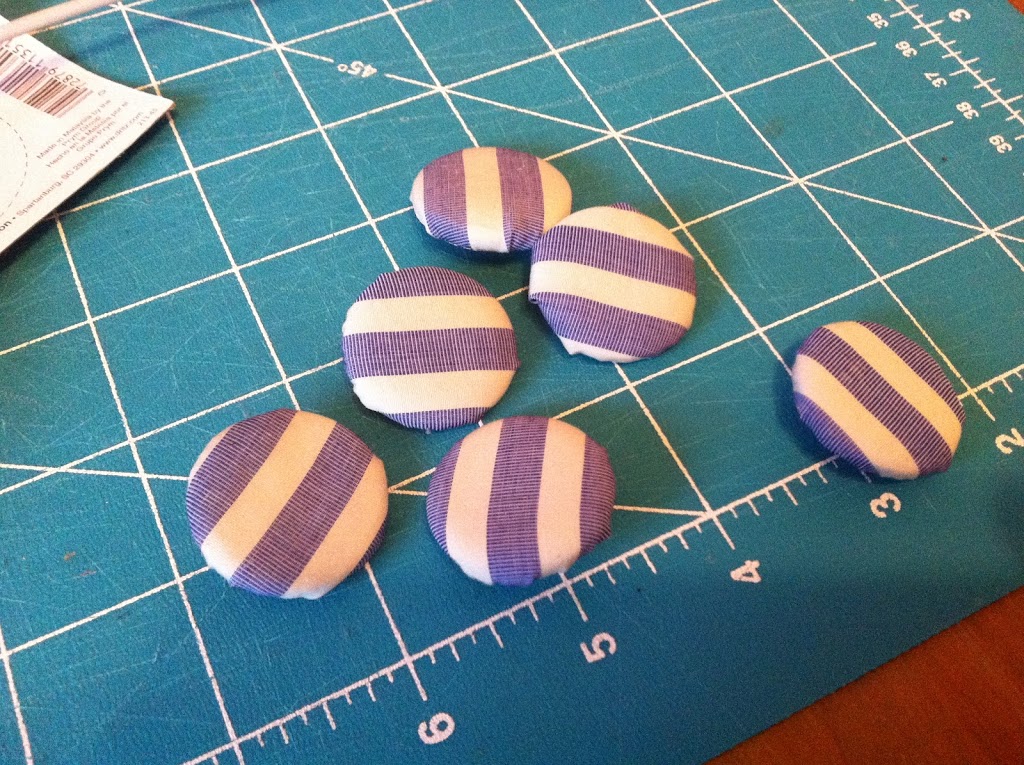 Why does sewing have to be so hard?? 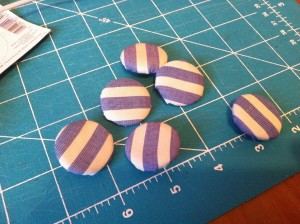 I’m currently trying to draft a look-a-like dress based solely on a picture. Not all of this is difficult – I can make a fitted bodice and a gathered skirt. I can insert a zipper and sleeves. But this dress I’m copying does have a big fat collar and I’m having a little trouble recreating it. But one of my biggest issues are the buttons.

I need four fabric covered buttons. I’ve made these kinds of buttons before. You get a kit that has two metal button pieces plus a little plastic cylinder-like tool to help you in assembly. The packaging has a template you cut your fabric from and it all goes together all hunky dory-like.

Well, not these buttons. These were the “no tool needed” type. Which is stupid because that tool is very helpful! It bends the fabric over the edge of the outer button piece for you and keeps it in place while you attach the backplate.

These “no tool” buttons have “teeth” that are supposed to catch the edge of the fabric, only they do not. They’re almost as useless as the teeth on the big, flying monster in the last half of The Avengers (I mean, really, that thing is so huge – what does it need to chew!?!?). 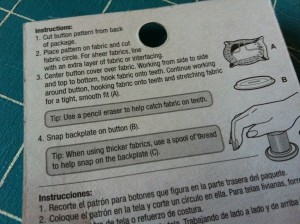 The equally useless instructions give you this tip: “Use a pencil eraser to help catch fabric on teeth.” A pencil eraser!? This is 2012! I don’t even own a pencil. I have an iPhone to take all my notes but that won’t help me here. (You think I’m kidding – no, I own one mechanical pencil with no lead and a tiny eraser nub.)

So I used glue to keep my fabric in place – which doesn’t work that well either because you have to hold the fabric down long enough for the glue to stick then you have to quickly slam the backing on top and use a pin to stuff any outlying fabric into the button before it all explodes in sticky glue mess in your hand. 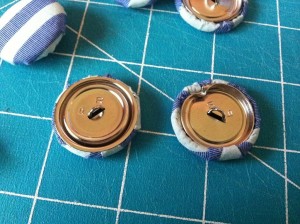 Oh, and there’s a correct way to put the backplate down over the button. Turns out I was doing it the wrong way. In my defense this illustration in no way has any sort of arrow or indication of which way is “up.” Stupid.

No wonder both my hands, my boyfriend’s hands, the spool of thread I was using and the back of these buttons took a beating. Only after three buttons did I figure out that the back was upside down. Why don’t you look at this picture above and guess which way was the “correct” way. 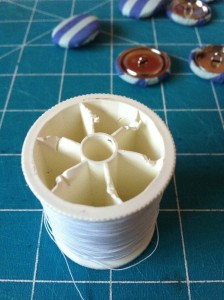 Even when I had the pieces facing the right direction I still need a hammer to jam the two together. Last time I heard a hammer was, technically, a tool.

I don’t think I’ve ever been so frustrated or cursed this much during a sewing project even with all the seam ripping I’ve done in my life. These stupid buttons don’t even look that good from the right site anyway. *Facepalm*

This combined with my collar-drafting troubles have convinced me to put this project away for a day or two and come back to it when I’m not feeling like I want to beat something (or someone) senseless.

What’s the most frustration thing you’ve ever done in sewing? Notion related or otherwise? Have you every had so many problems with a project that you had to take a step back and work on something else?

Oh, and Susan, I know you are some sort of genius when it comes to these kind of buttons – well, don’t tell me how I’m doing it wrong. You’ve just got some crazy button mojo that us mere mortals do not have and I have accepted that.