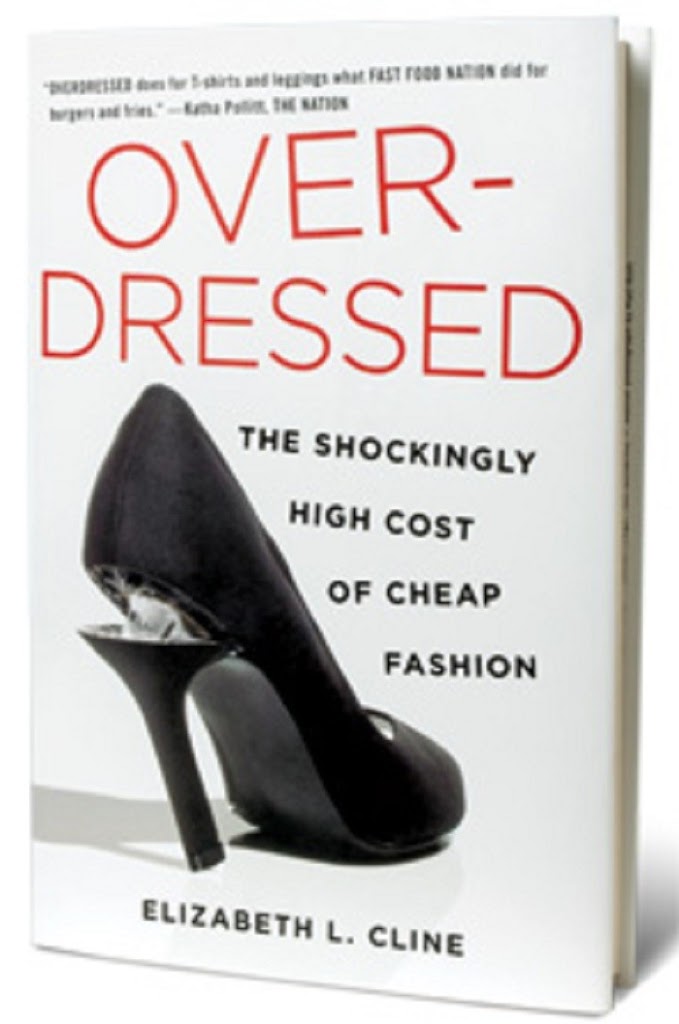 Overdressed, the book, not me 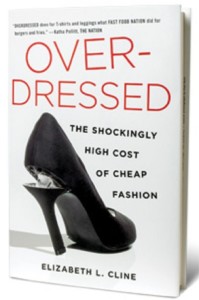 Yeah, I jumped on the bandwagon and read this book, Overdressed: The Shockingly High Cost of Cheap Fashion by Elizabeth L. Cline (thanks public library!). While the book wasn’t especially surprising it was worth the read and has provided great discussions on numerous blogs.

I should point out that I’m not new to the anti-fast fashion movement. While I don’t often thrift (I find giant thrift stores overwhelming) I do make nearly all my own clothes these day (not exactly intentionally, I know there are bloggers out there who have taken no-shopping pledges, I just really like making my clothes). I’ve also boycotted Forever 21 a few years ago after I dug into their record of poor employee treatment, sweatshop conditions, blatantly copying other designers’ work and a miriad of “un-Christian-like” ethical behaviors.

I do occasionally shop at Gap and Target, though.

So while I can’t completely relate with the girls Cline interviews who spend reckless amounts of cash for pounds of cheap Zara and H&M finds and then video blog about it I do understand the appeal.

Never in our history have we owned as much clothes as we do now nor has clothing ever been so inexpensive. Because of that we are the first or second generation where the majority of women don’t know how to sew and if we do sew it is because we are “hobbyists.”

What I liked about Over-Dressed was that Cline doesn’t put the blame on one faction of the fashion system over another. It’s a cycle between consumers, the industry and the factories where all these cheap duds are produced.

We’ve been conditioned to believe that clothes need not to be “good quality” but “good enough” for the price. We are disconnected from fiber types, construction methods and terms, and what a nice garment even looks like. Have you ever owned a RTW with french seams? Bound seams? How are we even supposed to know if we’re being duped?

Then producers keep pumping out new product week after week to get people to return the stores. Trends come and go with the wind which gives us a lot of variety (although Cline would probably say it’s superficial variety) it doesn’t last long. (I don’t care if peplums are out next spring, you can pry my peplum tops out of my cold dead fingers!!!)

A bunch of other bloggers have commented about the book, it’s meaning, the cause of fast fashion and what it says about us. Deepika notes that this book isn’t about the art of fashion but consumerism. The Slapdash Sewist takes it a step further – it’s not about fashion but our need for shopping as a pastime in itself. We don’t really care about what we’re buying. Shopping is just something we do.
Leah makes the point that women in the West no longer do this traditional task of sewing which has allowed us to advance our own careers yet we just delegate the work to poor women in developing countries. This leaves us in a privileged position to sew because we want to not because we have to.

It is about all of these things, fashion, status, the ability to participate in a system that was only reserved for the rich. An H&M just opened last week in my town and I admit I was a little tempted to just go in and check it out. The author mentions the pleasure that young women get by going into stores like these were every single item is within our price range, where as going to Nordstrom or Anthro we’d only be able to go to the sale section or be limited to buying just one item. There’s something nice about feeling included in the shopping experience. In that case it’s more about buying lots of clothes because we can, not necessarily because we need or even want the items.

I expected this book to be preaching to the choir and it is, but I was surprised to learn about pieces of this system that I only vaguely understood. I knew that a lot of donated clothes were sold in bulk to Africa but I didn’t know how much, or how much we really donate to charity, or how much is turned into carpet padding (makes me a little more uneasy about donating my handmade clothes I toiled on but weren’t successes).

I also knew about how China has thousands of giant factories filled with migrant workers who live in dorms and who now want a piece of their own exports for themselves. What I didn’t know was the full implication on Chinese society. (I could write a whole post on China’s changing economy but I won’t, the book gives you a little taste).

But the result of combining bad quality garments, consumers’ unrealistic expectations of the clothing prices, factory conditions, lackluster thrifting, giant conglomerations makes me feel like I’m damned if I do, damned if I don’t.

Cline discusses how cheap fashion has caused luxury prices to rise in the last decade leaving no middle of the road price/quality option for clothes out there for consumers. I like to compare it to the recent wealth gap in the United States where 1% of the population has an exorbitant amount of money while 99% make zilch in comparison. The 1% can afford the price gouged luxury designers while the rest are relegated to a swarm of polyester crap. There are very little middle class garments available even if you wanted to buy them.

You could still buy from the Gap or Macy’s or wherever after checking their factory ethics declarations but how can you trust them? Cline visits several factories in the US, China, Bangladesh and the Dominican Republic. In each case the conditions vary drastically. She mentions that the majority of Chinese factories subcontract to other factories, often without the companies knowing about it. Many of these factories are illegal. Cline also states that Gap alone uses over a thousand factories in forty different countries. It is impossible to know which factory produced which garment and which factory is better than another.

On the other hand you could buy vintage or from thrift stores but as we all know vintage buyers scour Goodwill and snatch up all the 60s goodies before you ever get the chance and because there’s such a limited supply the price rises. If you can’t afford a modern $200 dress how can you afford a 50 year old $200 dress?

And what is left at the thrift store is H&M and Old Navy cast offs for marginally less than you could buy them new.

So that leaves us with drastically altering thrift finds which some people are very good at (I don’t have a knack for envisioning what an oversized mumu could be so count me out) or sewing our own garments from scratch.

This is a great solution except for a couple issues: 1) odds are the majority of our fabric probably comes from China or Asia (unless we’re all buying Italian wools all the time, I know I’m not) and also 2) If we, the socially conscious, abandon the fashion system all together, what does that leave? People who will continue to buy from Forever 21 looooooooong after they have passed their 21st birthdays.

It’s similar to one of the reasons why I stopped being vegetarian. I was not one who thought we should never eat animals. I was more concerned for the well being of those animals and how it would affect me, the person eating them. Back when I was in highschool, prior to the huge organic/all natural/no anti-biotics movement, I lived in a smaller town that hadn’t seen a proper farmers market since WWII. I had no way of knowing what was in my meat, where it came from, or how the animal was treated (kind of like factory workers). At restaurants I was even more clueless. My best bet was to avoid eating meat completely.

But if I abstain from meat like some sewers abstain from all RTW clothing how can I be an advocate for change? If people like me stopped eating meat the remaining carnivores wouldn’t care about artificially plumped pigs or chickens living in such confined quarters that their beaks are clipped so they don’t peck each other to death. And if no one cared, how would it change? Now I eat meat again but I buy specifically organic or brands that are local. In restaurants I only eat meat dishes if I know where the meat is sourced (which is rather easy in Austin). This way the meat I want to eat continues to be more available.

The same should go for us. If we want to see more textile jobs in the US or more boutiques carrying organic cotton dresses or designers who inspire us we have to support them. Sure, right now the US may be like my hometown, blissfully unaware of their expanding waistlines like their overflowing closets, but if we buy at least one or two pieces from indie designers we love then that market will grow and the US might resemble Austin a little bit more. 😉

A lot of us do make a majority of our wardrobes but even I still buy RTW jeans and the occasional coat or camisole. If you’re a frosting sewer you can buy one or two pieces of cake from a great local designer that you will wear for years and supplement those basics with homemade fancy floral frosting sprinkle dresses. If you’ve ever sewn one of Grainline Studio’s patterns imagine how well fitting one of her Hound pieces would be?

Home sewing is only one solution to the fast fashion problem but it can’t completely solve it.

In the end I’m not that worried about the future of fashion and consumerism, with China growing and the West getting more eco-conscious I think fast fashion is about to hit critical mass. It’s like with stars – the Red Giants burn themselves out faster than the smaller stars.