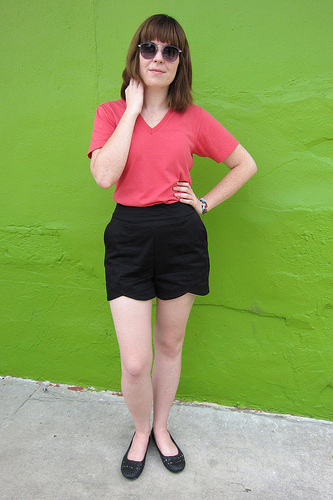 These shorts were much more difficult to make than expected – not because the Pattern Runway Sweet Shorts are a difficult pattern, they’re not, rather I made many dumb mistakes that resulted in unnecessary effort. I couldn’t even get the photos of them right the first time! The pics turned out all blurry. These are Sweet Shorts Pictures 2.0.

Even for all the pitfalls and confusion I can say that I really like these shorts. They fit like a glove and are comfy and cute. A triple threat when it comes to clothes sewing!

The Goal: These are the last pair of shorts for my Shorts and Shirts Summer Wardrobe and seeing as they’re plain black they’ll probably get the most wear. 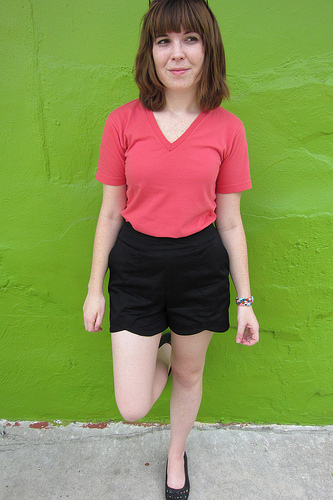 The Pattern: Pattern Runway’s Sweet Shorts with the scalloped hem in front. I like that it’s not too scalloped like something a five year old would draw when making a picture of a boat on the ocean. It’s a classy scallop! I was between sizes so I made the executive decision to slice right down the middle between a small and a medium. Perfect fit! 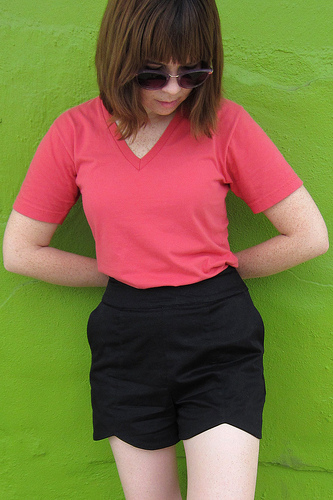 The Fabric: Black cotton bottomweight from Joann. Nothing fancy but it gets the job done and it’s not too drape-y nor too stiff. The pockets are leftover yellow batiste, nice and lightweight for the pockets. 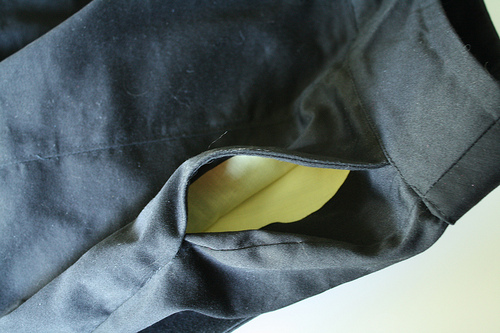 The Changes: I didn’t make a muslin, instead I added extra seam allowance space in the crotch area because I knew I’d most likely have to make changes there. Luckily the back was fine but in the front I had to make a common adjustment for me – moving the crotch line farther outward at the lower curve. Amy at Cloth Habit has a great visual tutorial of the change I made. 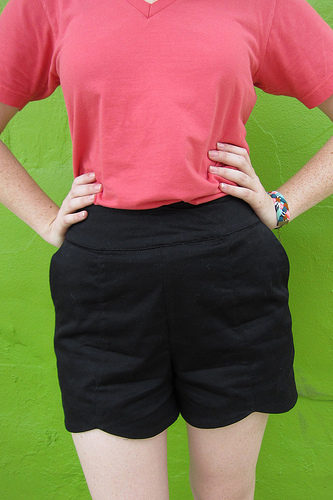 The other change was to the side seams. My thighs aren’t sticks but for some reason most of the shorts patterns I use make my thighs look stickly. I trimmed only the back leg pieces at the side edges and kept the front shape the same. This tucks in the back leg area nicely while leaving the front in its original size.

But – mistake #1 The bottom of the legs use a facing rather than a hem which is good because trying to hem that front curve would be impossible. Unfortunately when I altered the back leg sides I needed to alter the facing, too. Well, oops, I cut the facing too short. I tried to make it work but alas – no luck. So I had to re-do the facings. 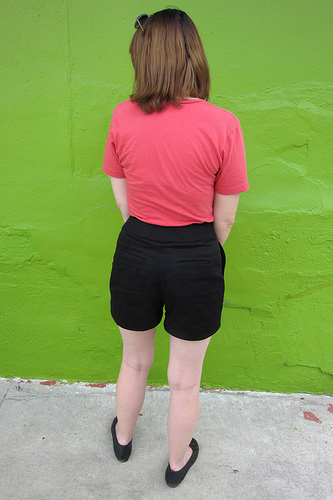 Also, I love the idea of the welt pockets in back and I was determined to follow the instructions given in the pattern. I know that in early editions of this pattern there was some typo or mistake in the pocket directions but I believe I have the fixed version. I really did try to follow along and I got to the point where I was about to add the pocket bag when I gave up. 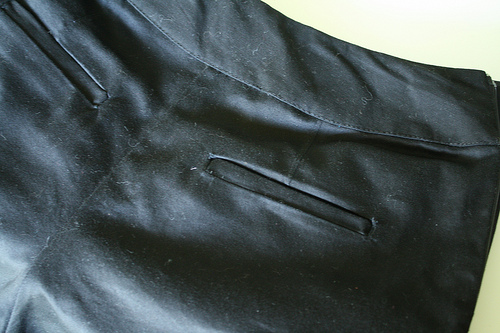 I’ve made welt pockets before but his time the directions and I just didn’t get along. I didn’t always understand the illustrations (everything just looks like a rectangle to me!) nor did I really know what the pocket was supposed to look like in the end. I even went to Pattern Runway’s blog to read the tutorial on welt pockets there. The tute made more sense than the pattern directions for me.

I understand why she wants you to make these pockets in a certain way. The pocket should extends all way to the waistband seam for extra support and she has a clever way of making sure the pocket lining fabric doesn’t show through in case the pocket gapes slightly. But there seriously has to be an easier way of explaining it. 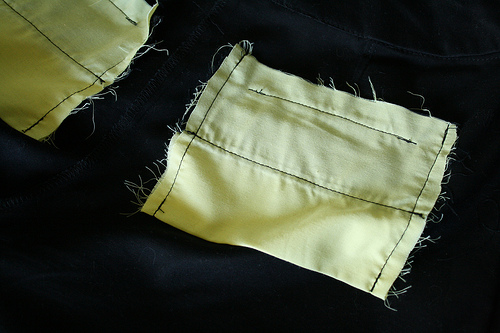 (yeah, I should really finish those edges, or at least pink them…)

In the end I reverted  to my fave way of doing welts – what I call the “one piece welt” because the window backing and welt flap are the same piece. Poppykettle has an awesome tutorial for this technique with clear pics and easy to follow instructions. The only thing I did differently was to incorporate Pattern Runway’s welt backing so you can’t see the yellow lining at all from the outside.

I made another mistake by attaching the waistband back facing first rather then the front piece which caused problems trying to add the invisible zipper. Lots of unpicking. Ugh… 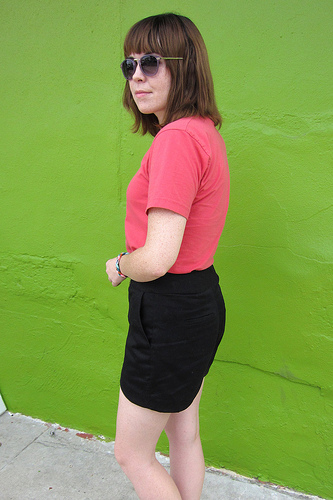 And then I had to decide whether or not to take time to fix a sway-back issue under the waistband. Because I wanted to fight my compulsive laziness, I had this great idea that if I went ahead and unpicked part of the back waistband then that would force myself to fix it because the stitching would already be un-done. Only later did I realize I had accidentally unpicked the front waistband! Ugh. Lots of re-stitching. Even after fixing the back the issue is only partially resolved. There’s still some extra fabric folded at the upper back but it is better than before.

The Results: These are great shorts! I love the styling, the high waist, the top stitching in front and I even love those pesky welt pockets. Perhaps I’ll make them again in the future and change the pattern up a little bit. I love Lizz’s version with gathers and a belt tie.

Oh, and Justin took these pictures while we were out today. He figured out how to do the fast-frame picture taking and wanted to use it so to appease him (gotta keep my important photographer happy!) I did some dancing. We can call this the “happy shorts” dance.