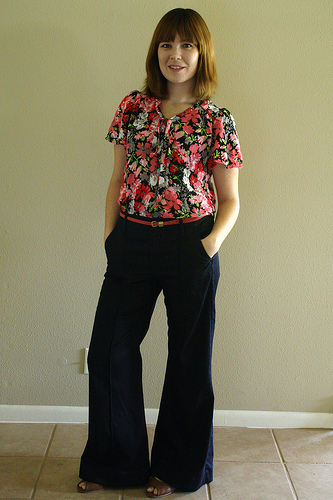 Fact: When making a shirt with long neck ties you will inevitably stitch those ties to other parts of the blouse by accident.

The tie bow was the last piece that I added to this shirt and I still stitched the ties to the facing twice. 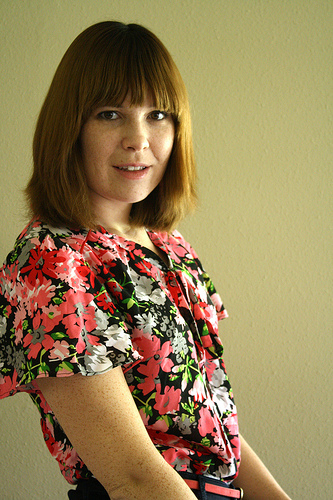 This blouse took a while to finish for two reasons: firstly I self drafted it and that took a lot of tweaking, and secondly I’ve been distracted by video games – namely Elder Scrolls Skyrim. Yes, I admit it. I play video games. Ok, well, not always, just lately. And that game is the longest game in the history of game-kind. I could read the entire Game of Thrones book series before I finish this game! I’m glad sewing doesn’t take as long as this game.

Anyway, on to the shirt. 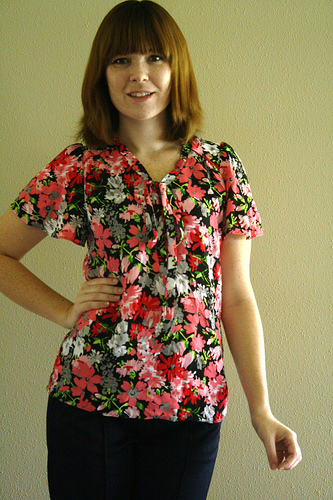 Karel, a sewing maven from my sewing group was kind enough to lend me a big fat pattern drafting textbook. I was like a kid in a candy store with that thing. I know a lot about drafting but certainly not everything and it was nice to learn the “why” of what I was doing. 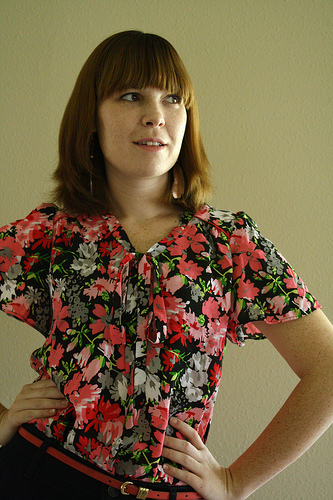 I began with a basic bodice block (the same I used for this dress). I rotated the darts to the shoulder and turned them into gathers. Next I made a yoke from front to back that I made into one piece so I don’t have a shoulder seam. Then I turned the back darts into tiny pleats (hard to see with this print). I made gathered, semi-flutter sleeves, lengthened the shirt by doing a rough body measurement of how long I wanted it to be, and finally I two 33″ long strips that I stitched together and used as the tie. There’s also a neck facing holding the tie in place. The sleeve and bottom have baby hems which I like with this fabric. 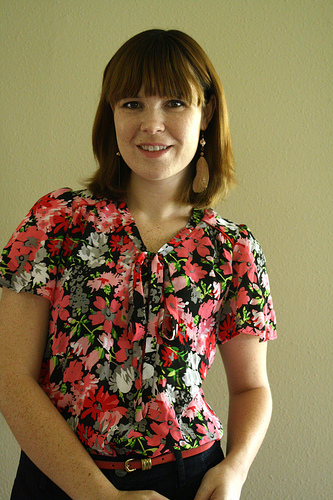 I put some scrap bias tape to good use by making flat piping between the yoke and shirt pieces in the front and back.

The fabric is a rayon I bought from Fabric.com (I love rayon lately!). Justin said he liked it but the print reminded him of his grandmother, to which I said “Your Grandmother is one classy lady.” 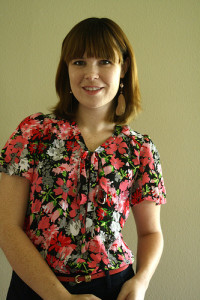 Since I made the neckline and tie from scratch at the end it’s not quite the most accurate portion of the blouse. The front V isn’t really pointy even though the facing is nice and pointy. Not exactly sure how that happened. Also I cut the facing too big and had to fix that while I was sewing. What I did here was just cut a neck hole in the fabric that I could stick my head through then cut the V shape later. Next time I’ll make my v-neck into the original pattern.

Well, now I’m more than halfway through my Shorts and Shirts Summer Wardrobe. I’ve made two shorts (one was already made) and two tops. Only one pair of shorts and two shirts left to go! Not bad, I figured it would take me a lot longer to sew this mini-wardrobe.