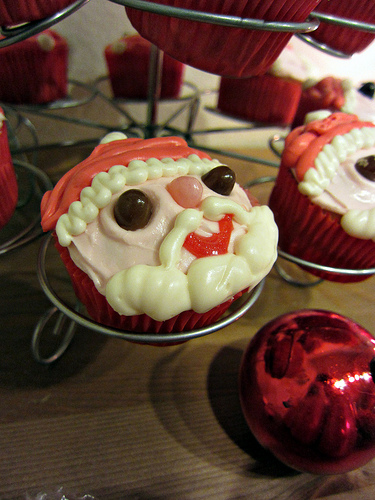 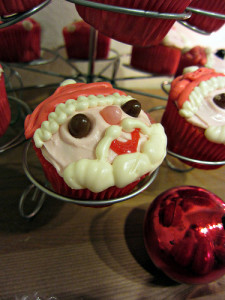 I had a bunch of these at my party on Friday and I had to keep convincing people to eat them because they kept saying the cupcakes were too cute to eat. It’s food, people! Eat it! 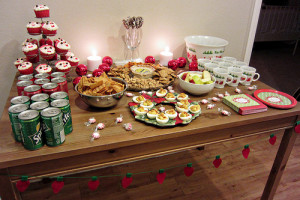 To make 24 cupcakes you need 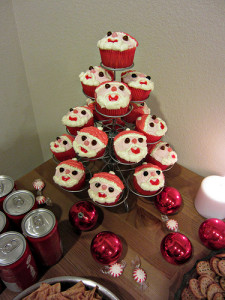 Bake your cupcakes in the paper liners according to the directions.

In one tub of icing dye it a very light pink. I only used one drop. Cover all the cupcakes with a thin layer.

Next, dye the rest of the pink tub with red food coloring. I hear if you use the gel kind of coloring and let the icing sit for awhile the color will deepen. I wasn’t that patient. With a big circle tip inside fill an icing bag halfway with red icing and make Santa’s hat by piping across and back in a zig zag over the top third of the cupcake (make sure you leave some room for the white part of his hat.

Then, with a smaller tip (I used a Wilton #3) and white icing in a bag pine a tight zig zag along the bottom edge of the hat. Add the poof on top of the hat with the same tip, just hold the bag in one place and keep squeezing until the poof is big enough.

Using a bigger circle tip and white icing I made the mustache and beard. For the beard I just made a series of big elongated blobs of icing.

I had some leftover sparkly red writing gel that I drew a smiley mouth but you could just as easily do the same with the red icing with a very narrow circle tip.

Stick your jelly beans on the middle of the face and you’re finished! 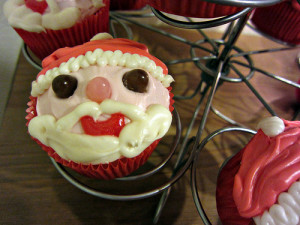 Wilton has lots of decorating tips on their site if you’ve never piped icing before. Really helpful.

Funny story, one cupcake was sitting too close to a candle on the table and Santa’s beard melted off!