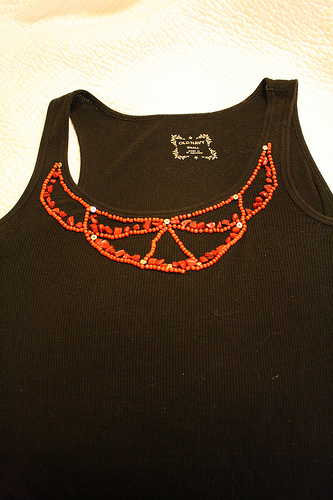 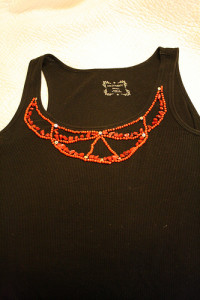 I saw these shirts the other day at Old Navy and immediately thought “I could make that!” Granted, all together the cost to make it myself would probably be more than the $9 Old Navy price tag but making it yourself is way more fun, right? Right. So that’s what I did and it’s a very simple idea and a great way to spruce up an old tank top and get rid of extra beads you might have at the same time. 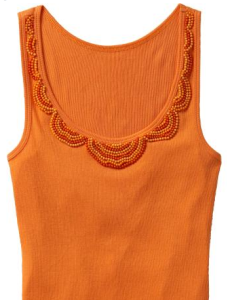 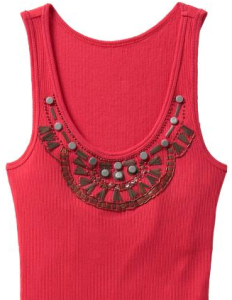 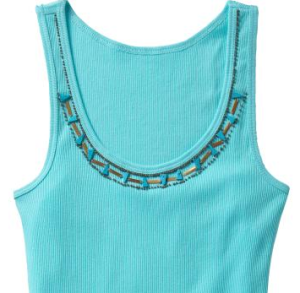 Supplies: Tank top or t-shirt, a variety of small beads, needle and thread, tailor’s chalk or some way to mark your lines.

Cost: About $7 for beads. I already had the shirt, thread, and gold beads 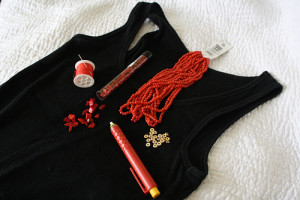 First you need to mark out your design. You could always free hand it but I’m not that skilled. I used a tupperware lid and a ruler to make sure everything was even. 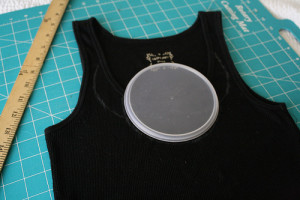 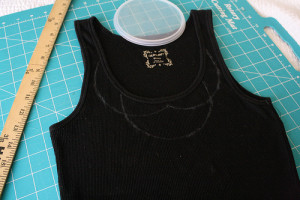 My chalk wore off easily so I had to trace over the lines a few times during the project just so I knew which direction to stitch. 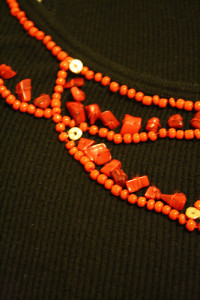 I used a ribbed tank which stretches much more horizontally than vertically. It’s good to consider the amount of stretch in the shirt so you don’t sew your beads to close together or too far apart. After I finished stitching each small red bead individually I went back and stitched three or four together at a time then doubling back one bead and stitching another group.

You don’t have to do that but I thought it made the bead lines straighter and they held together better when the shirt was stretched. It obviously takes more time, though. 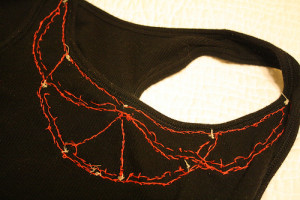 (stitching view from the inside)

I also tied knots after every few beads because I’m a little paranoid that my thread will break – better to use a good strong polyester thread. It’ll hold up better than cotton. 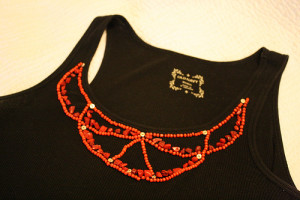 Once you have finished you will want to hand wash the shirt or at least wash it inside out on the gentle cycle from now on. You don’t want to rough up the shirt and lose all the beads in the washing machine! 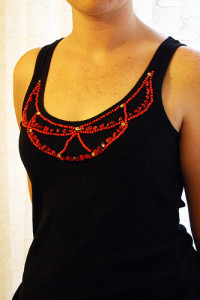 Because this project takes a lot of time and requires a lot of detailed hand stitching this is a great project to do while waiting for something, like for you boyfriend to pick you up from work, or for dinner to cook, or while waiting for the third season of The Tudors to finish downloading (love that show!).