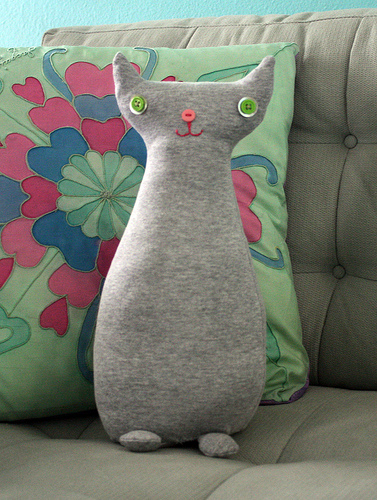 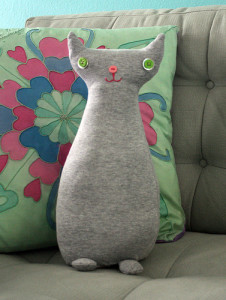 Supplies: about 1/3 yard sturdy felt (I used some stretchy jersey fabric because I messed up my first attempt at this craft and ran out of felt, I don’t recommend the jersey knit because it makes the finished product look lumpy), lots of stuffing, matching thread, scissors, sewing machine, pins, buttons and embroidery thread.

You can free hand the shape or you can download this pattern I made. The images are bigger than a standard sheet of paper so you’ll need to print several pages and tape them together. 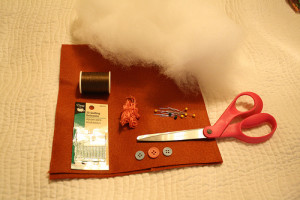 Cost: Free for me, I already had all the supplies.

Casualties: My first attempt was ruined by a bad tail. 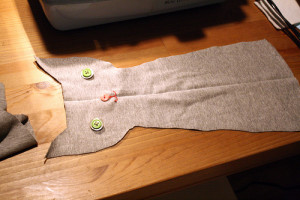 1. Cut out all the pieces: front, back, bottom circle, and four paw pieces. If you are using the pattern do not cut on the dotted lines, only the solid lines. The dotted line is where you sew the tail. More on that later. The pattern uses a 1cm seam allowance. 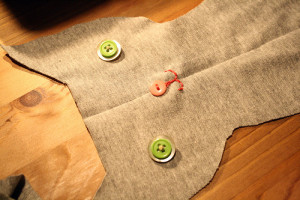 2. Sew your eyes, nose and mouth with fun buttons and embroidery thread on the front piece.

3. Pin the edges of the front and back pieces together, right sides facing each other. Sew around the whole cat, leaving the bottom open. You may want to trim the excess felt around the ears. It makes it easier to make the ears pointy when you turn it inside out.

4. To make a paw cut out 2 pieces of felt from the pattern and pin them together along the curved edge. Sew around the curve, leaving the flat side open. Turn it inside out. Repeat for the second paw.

5. Now for the tail. Flip your kitty inside out so that the face is on the outside. To make the tail you are going to fold the back in half vertically straight down the middle. Remember the dotted line on the pattern? You’re going to sew the back together along the dotted line. 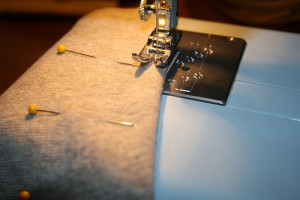 6. Now fill the cat with of stuffing. I like a firm plushy so I used a lot. I like to pull the fluff apart first then stuff it. I think this lessens the amount of lumps inside the cat. I used a chop stick to get the stuffing all the way up into the tail. Don’t forget to stuff the paws! 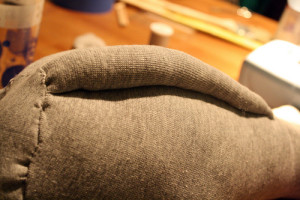 7. This is the tricky part because the stuffing makes the cat hard to work with. You’ll want to do a blind stitch by hand and sew the circle to the bottom of the cat. (Here I tried to hand sew the bottom from the inside but that didn’t look good so I switched halfway to a blind stitch. The second half of the bottom looks much better and less lumpy)

Make sure to flatten down the bottom of the tail against the back felt piece like in the photo above. In the front, stitch in the little stuffed paws between the front section and the bottom circle. 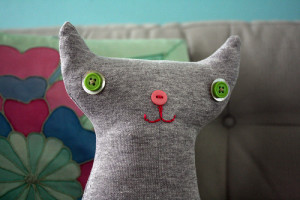 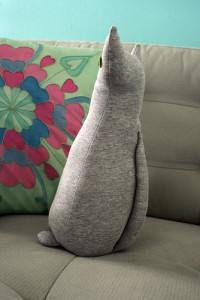 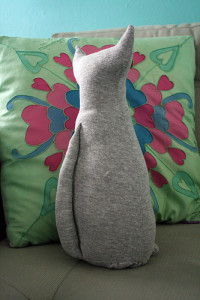 I think this would look really cute with a little pom pom collar and in different colors. You could even adapt it to make it a dog or a rabbit or some other animal, too.